This past weekend, the Formula 1 racing season commenced in Melbourne’s Albert Park.  Seen as the pinnacle of racing sports in Australia, the Grad Prix is the oldest surviving motor race in the country and the start of the F1 championship. Guess which redheaded race loving, sports enthusiast was there? Yes. ME.

If you know me, this isn’t really that much of a surprise considering that I follow stock car racing back home. For those of you that don’t, yes, I am a speed junkie. Admitting you watch Nascar automatically gives people incentive to tease you incessantly. I have heard many times, “but you do not seem like the stereotypical fan” ( which really means, that I do not adhere to the stereotypes of a beer chuggin’ redneck that many associate with the sport). Not only do I follow the sport, but I have also attended  multiple races in Indianapolis and loved them every time. Kasey Kahne baby! Granted, Nascar and Formula One are alike as apples and oranges. However, the adrenaline rush, enthusiasm and camaraderie among race fans are nearly identical despite the differences in car models, mileage, speed, and track.

Luckily for me, my two closest friends here are also race fans and wanted to go to just as desperately as I did.  We purchased concession general admission tickets which were fairly reasonable (can I please be a student forever?) and were prepared to make a day of it at the race circuit.

I scoured the city for earplugs which apparently are a rare item because I went to every supermarket  and convenience store in my neighborhood, Kmart, Target, and multiple pharmacies before I found a pair.  I consulted a few people back home who actively follow F1 racing and learned about some of the drivers and made my decision of which team and driver to cheer for.  I decided on team Red Bull and drivers Sebastian Vettel and Mark Webber (an Aussie).   They made me quite proud in the end, way to go boys!!

On race day we headed into the city, luckily, due to high race traffic the city set aside trams just to bring passengers to and from the circuit.  We were prepared with folding chairs, snacks, water,  ear plugs and of course cameras. I am a bit of a photography freak so I brought two of my three cameras with me, you never know when you might need more than one.  We toured the grounds, scouting for the perfect spot where we could see the cars zoom by and shopped around for some gear. I settled for a F1 Grand Prix baseball hat because my team’s gear was a bit pricey. When I say a bit, I mean I could buy  10 shirts for the price of the one they were selling. As much as I wanted one, prudence outweighed desire and I decided to make the fiscally responsible choice. Not to mention, I do have a sort of fascination with baseball hats; my collection has since doubled while being here and I wear them all the time.

The grounds were swarmed with people and held a plethora of events and activities celebrating racing and cars in general.  Old race cars as well as other beautiful models lined the paths and it was neat to see cars from all around the world including some classic American muscle cars. I felt like I had stepped foot in a new Fast & Furious movie. We finally found our spot on a slight hill in between turns 10 and 11 which had a perfect view of a straightway.  As the clock ticked down, we admired the fighter jets performing their aerial show and took bets( being poor exchange students, they were more hypothetical bets than anything) on who was going to win. My friend, Ann is F1 obsessed and she was proudly adorned in her Jenson Button t-shirt while she taunted me that Vettel and Webber were going down. 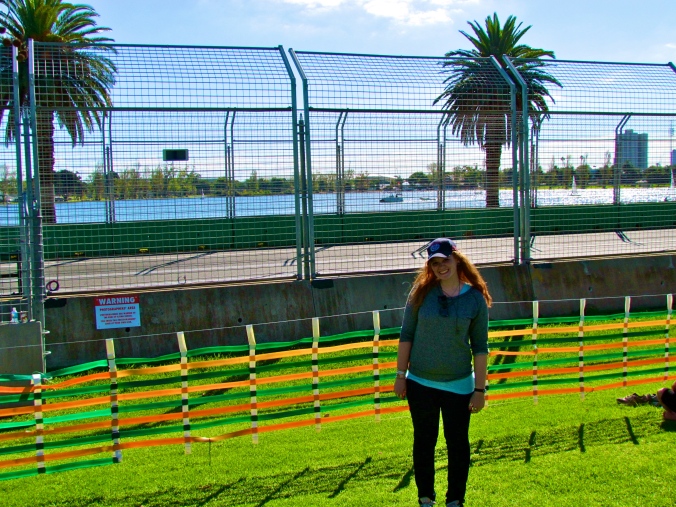 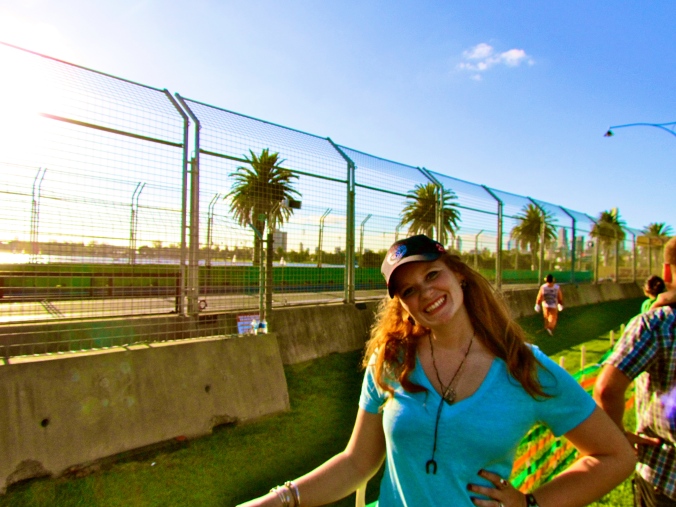 Good thing there was no money on the race, otherwise I would have had to swallow my pride and pay up. Button won, Vettel finished 2nd and Webber just missed the podium by finishing 4th.  The hum of the engines were so loud as the cars zoomed by us. It took me most of the race to take decent pictures because half of them I either clicked too early or late and got an empty track.  I cheered, snapped photos, listened to the announcers, witnessed a partial crash, and finally settled on taking a video of the cars racing by as I was having trouble taking pictures ( I guess my reflexes could use a little work). The energy of the fans were contagious as they rooted on their favorite team and drivers. 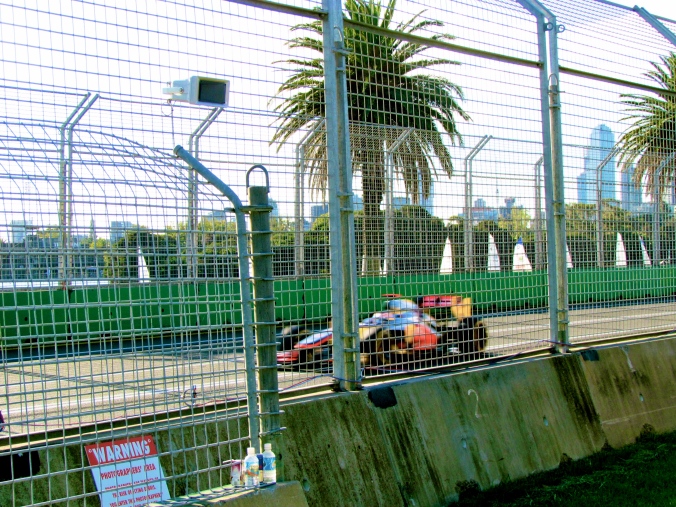 When the race was over, unlike in Nascar where they usher you out, they let the patrons walk all the way around the circuit. After celebrating on the track where we were photo-bombed by various crazy Australian guys, we took one last look at the circuit and headed home after a day full of sun, laughs, and excitement. 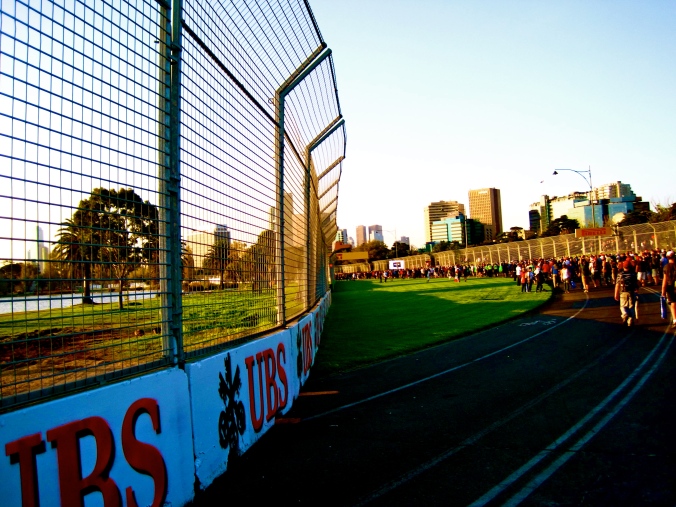 It was a once in a lifetime experience and I am so glad that I went to my first but certainly not last F1 race. I already checked, they have the US Grand Prix in Texas in November this year. Hmmm…. roadtrip?

Take only memories, leave only footprints.

I want to see the world, one footstep at a time. Welcome to my blog, where I explore every nook and cranny of my world (or wherever I'm living for the moment). Take a look around and enjoy the photos and stories. Have fun!

What I write about…